The Music of Michael Brecker

​​Charged Particles is very pleased to be joining saxophonist Tod Dickow to perform concerts celebrating one of the most important musicians in the history of jazz: Michael Brecker. 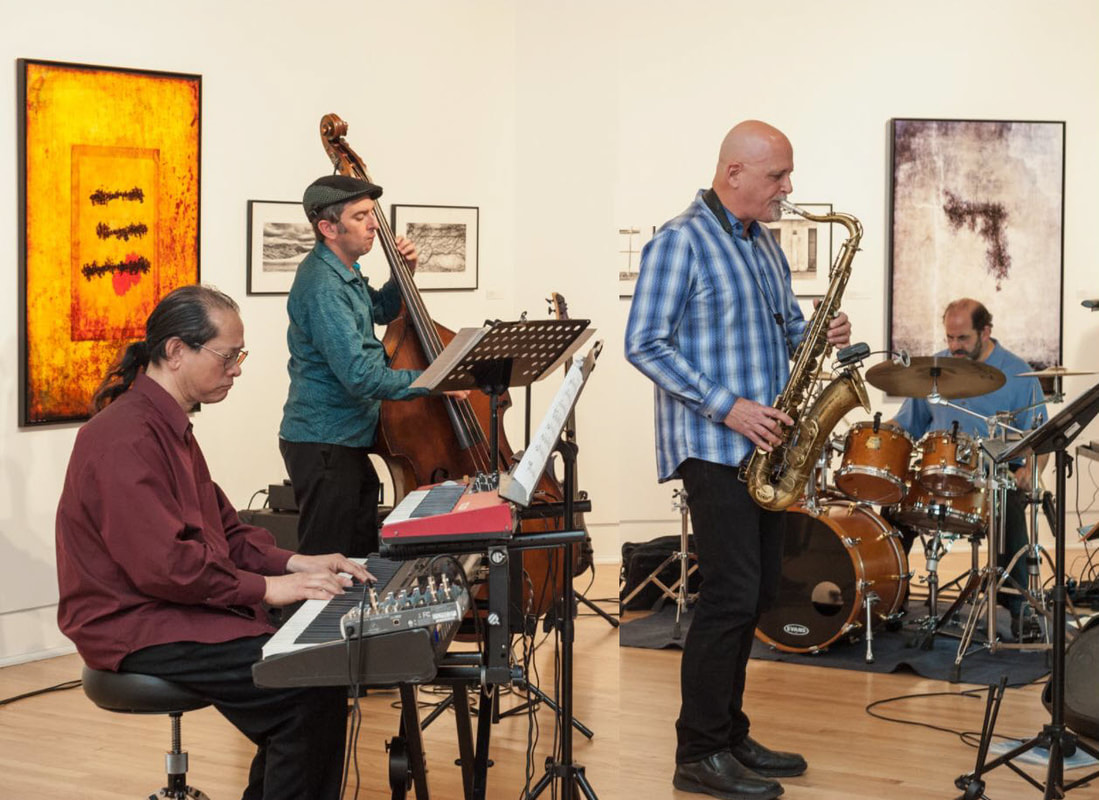 Performing with Tod Dickow and

the Brecker Music Live on KPFA 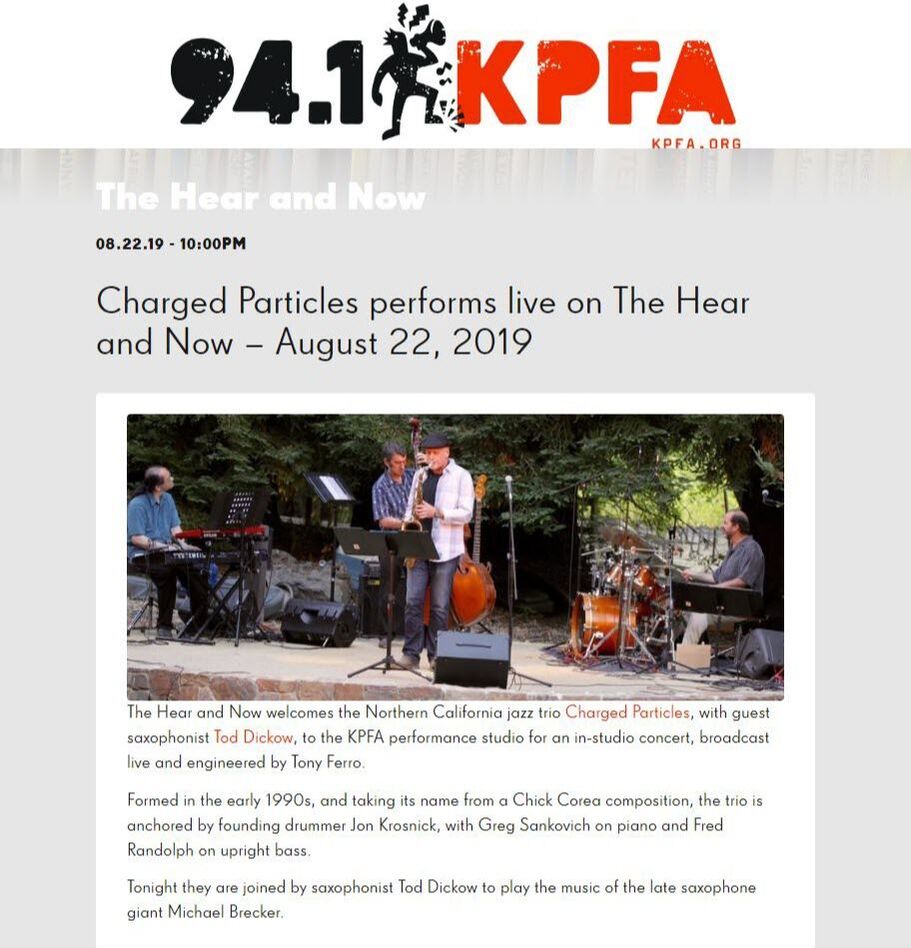 "Jazz But Not As We Know It"

"They rightly deserved their standing ovation.  The group was brilliant.


"What an amazing show.

​Very educational for all."

"Great program.   Everyone enjoyed the performance."

"Fantastic!  The energy, talent, and variety blew my mind.   They charged my particles!" 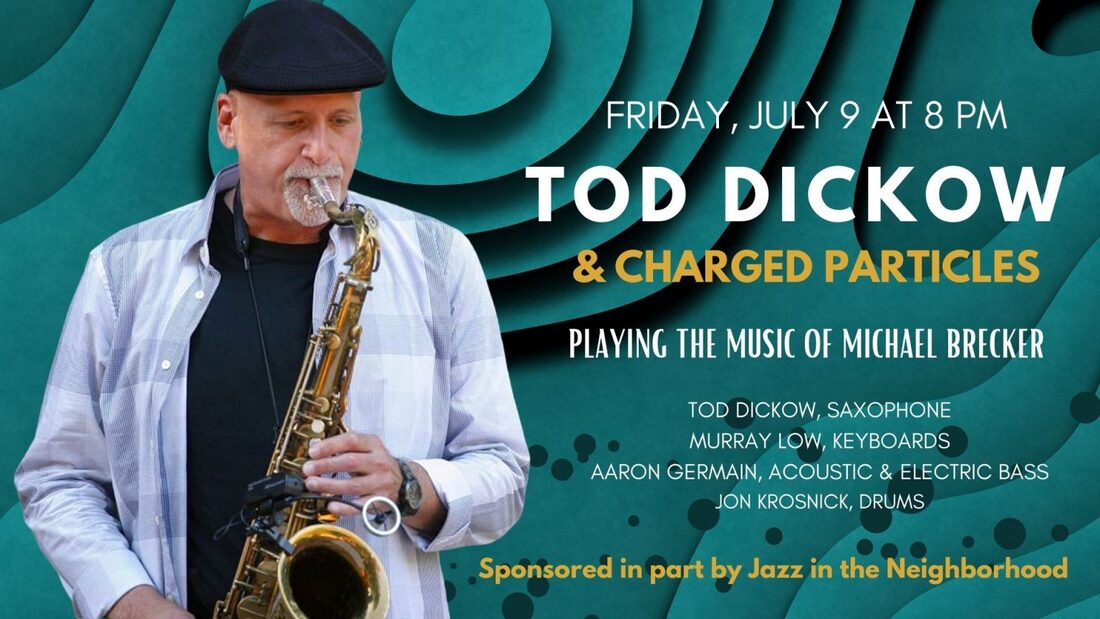 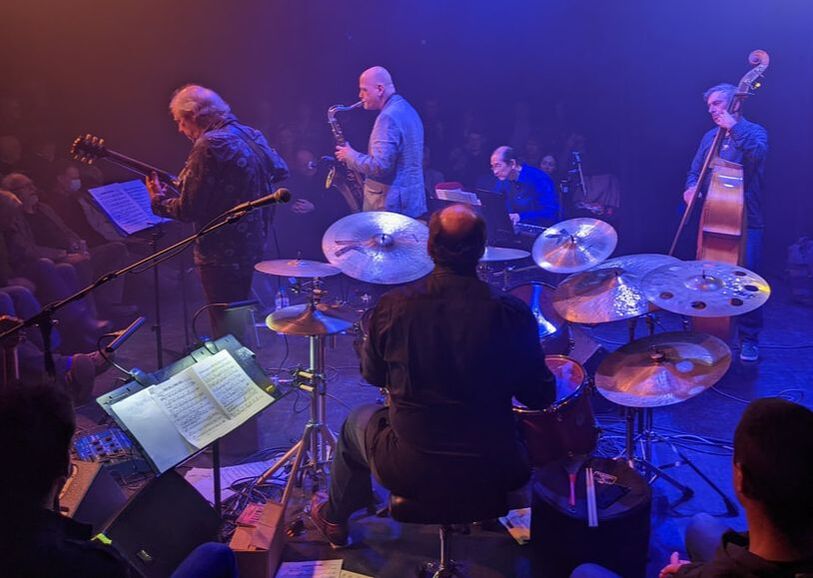 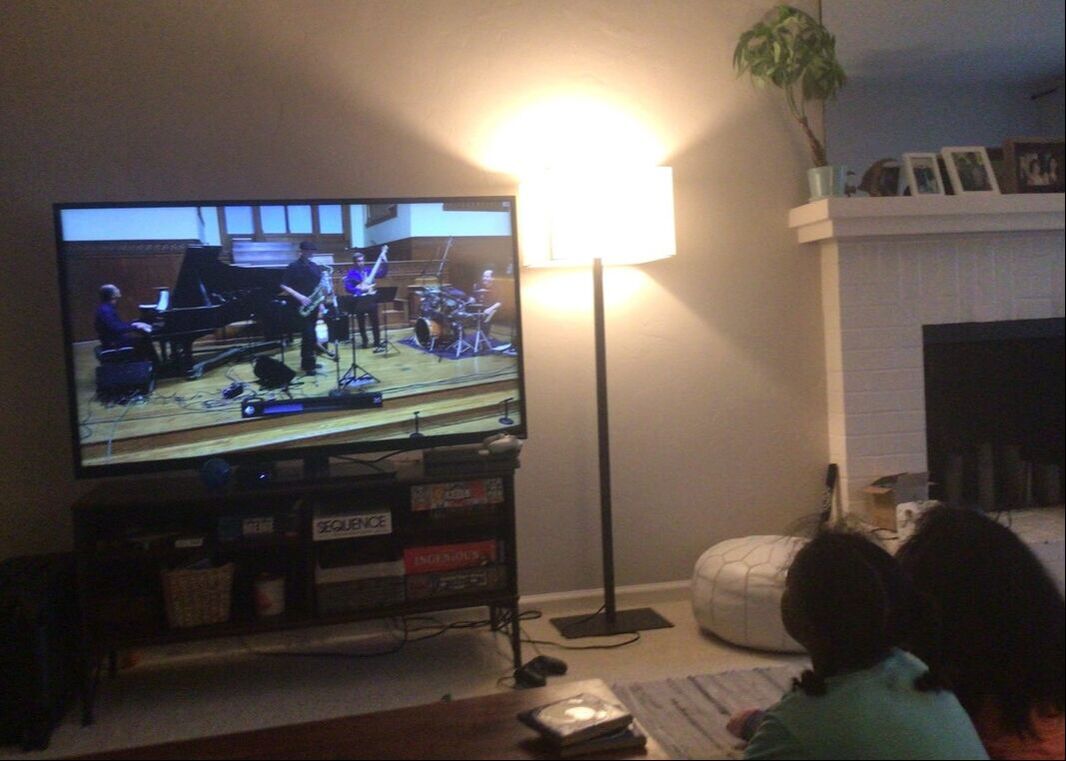 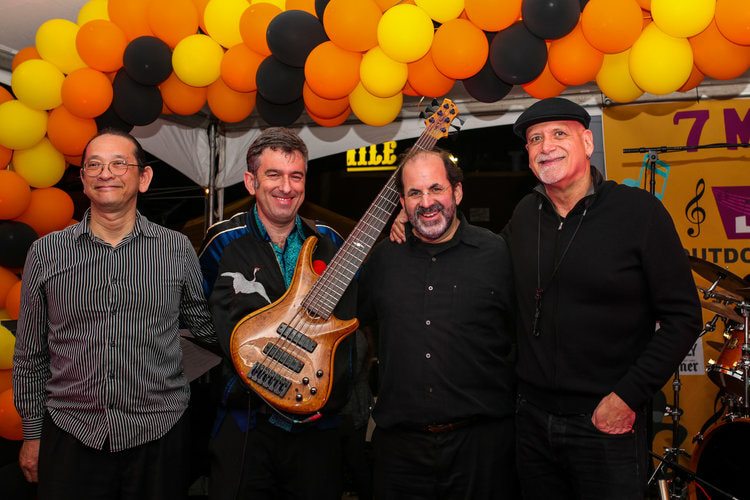 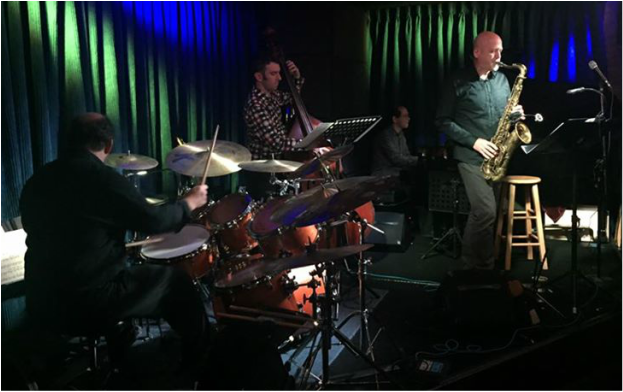 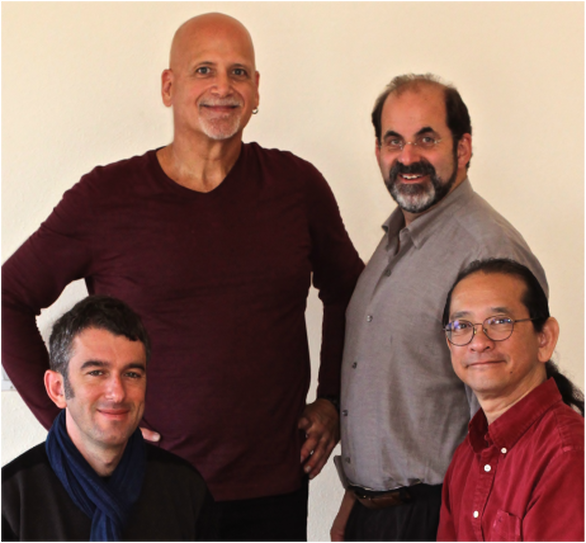 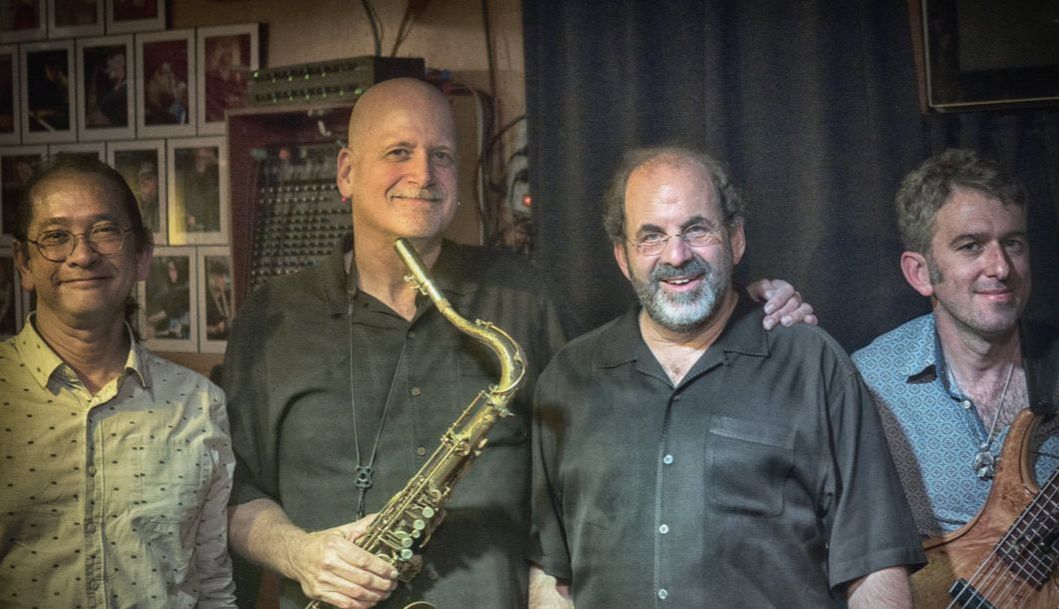 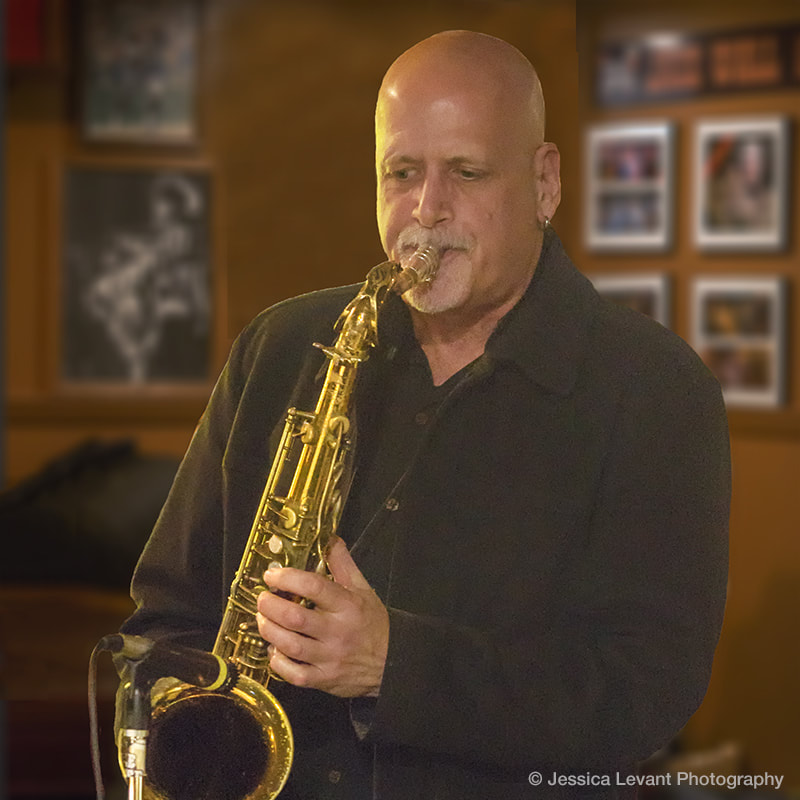 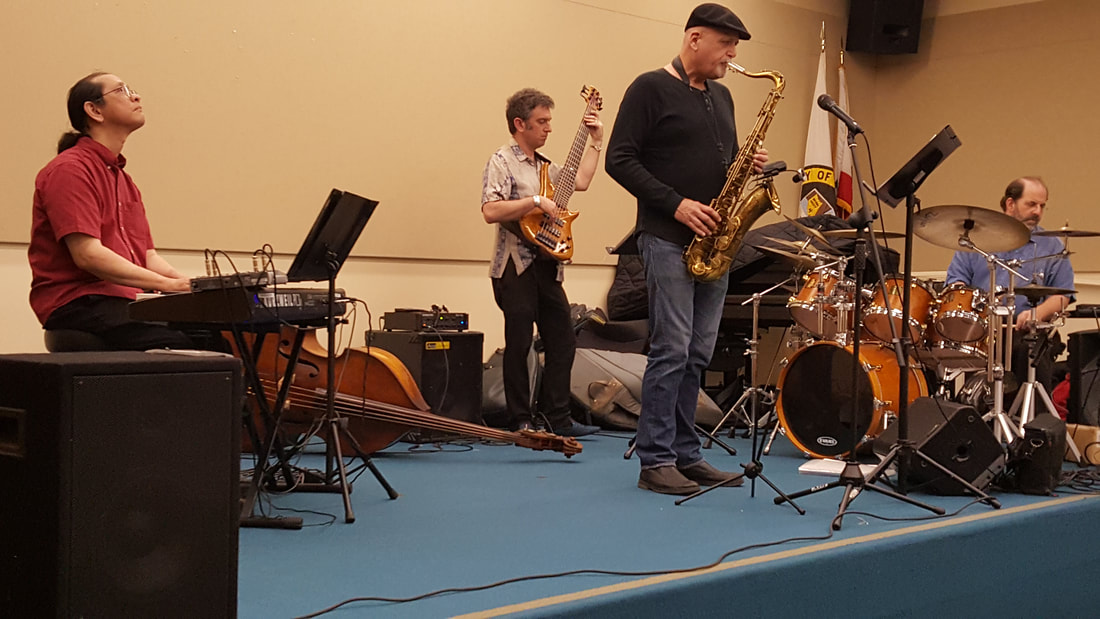 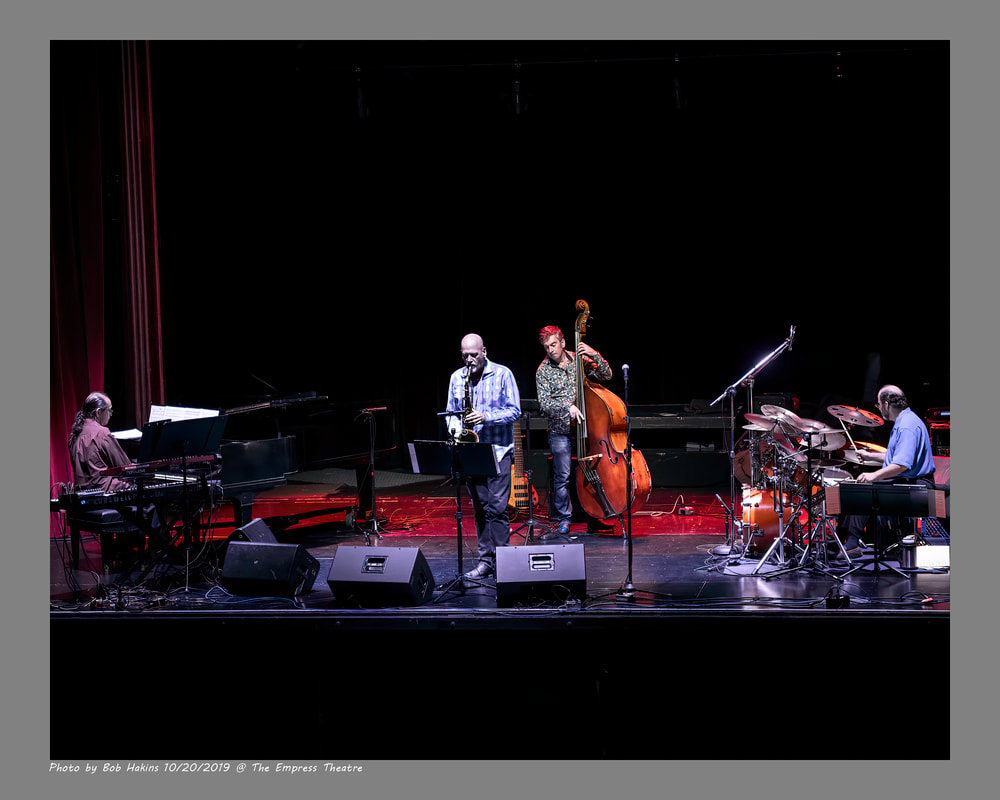 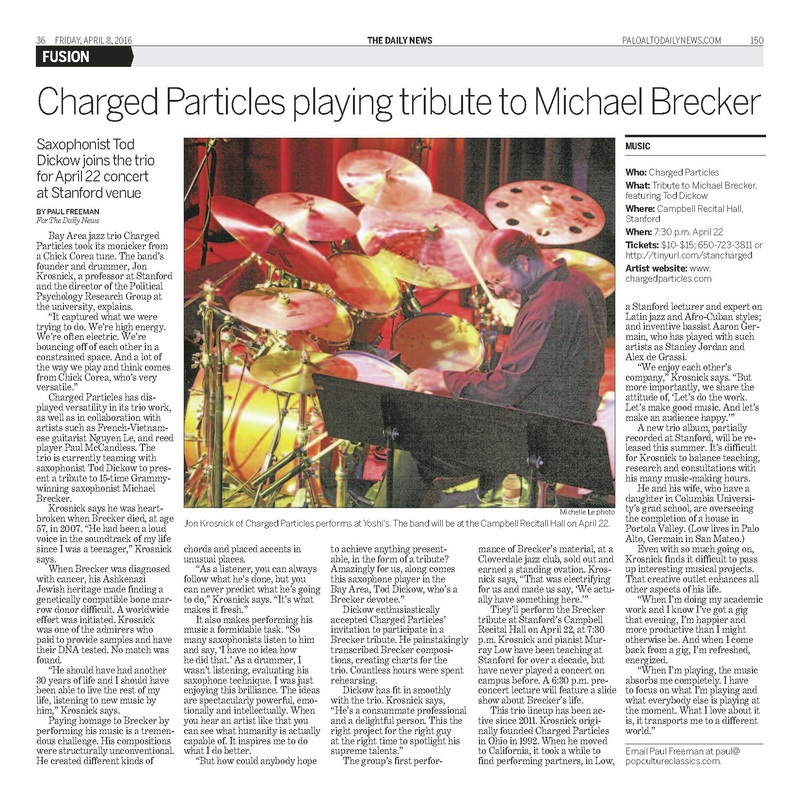 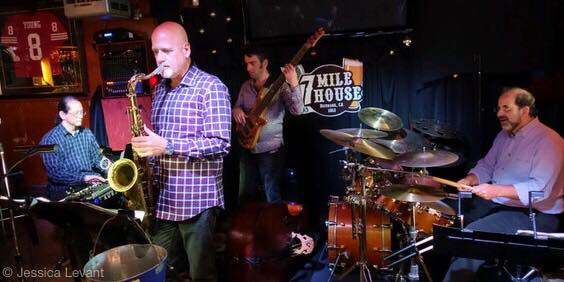 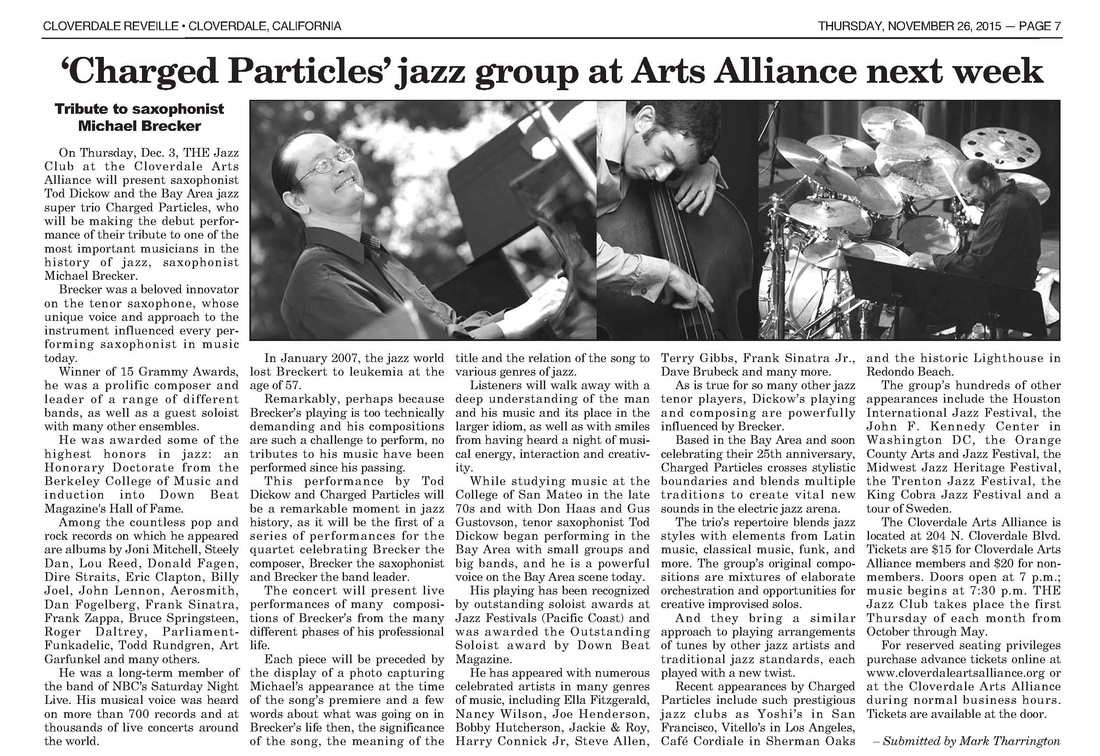 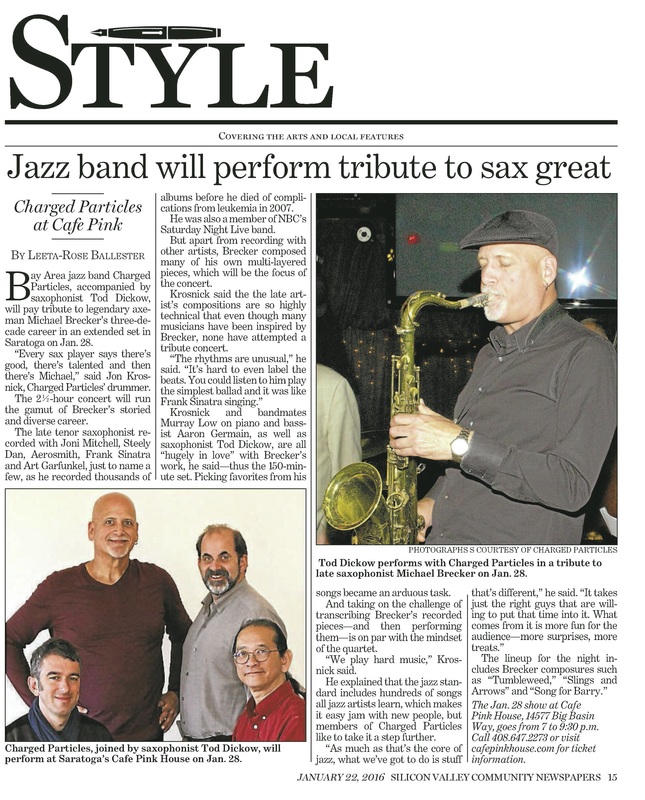 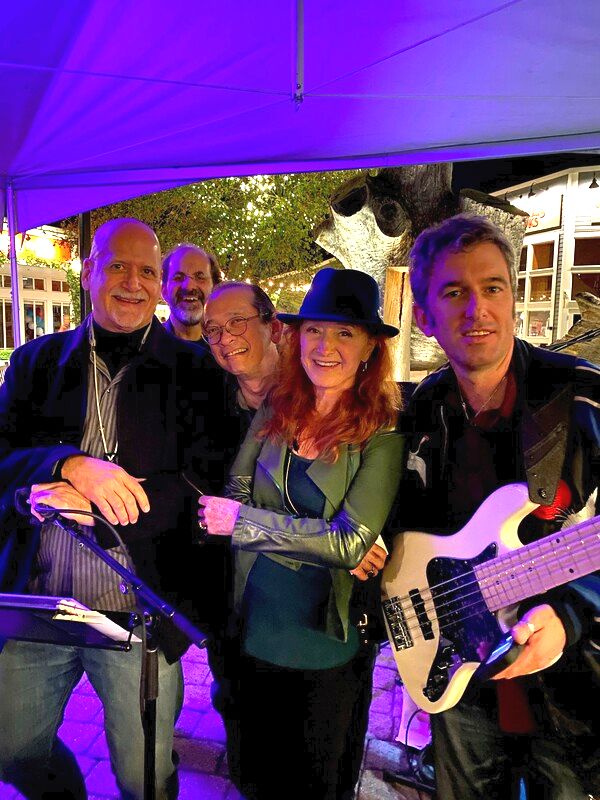 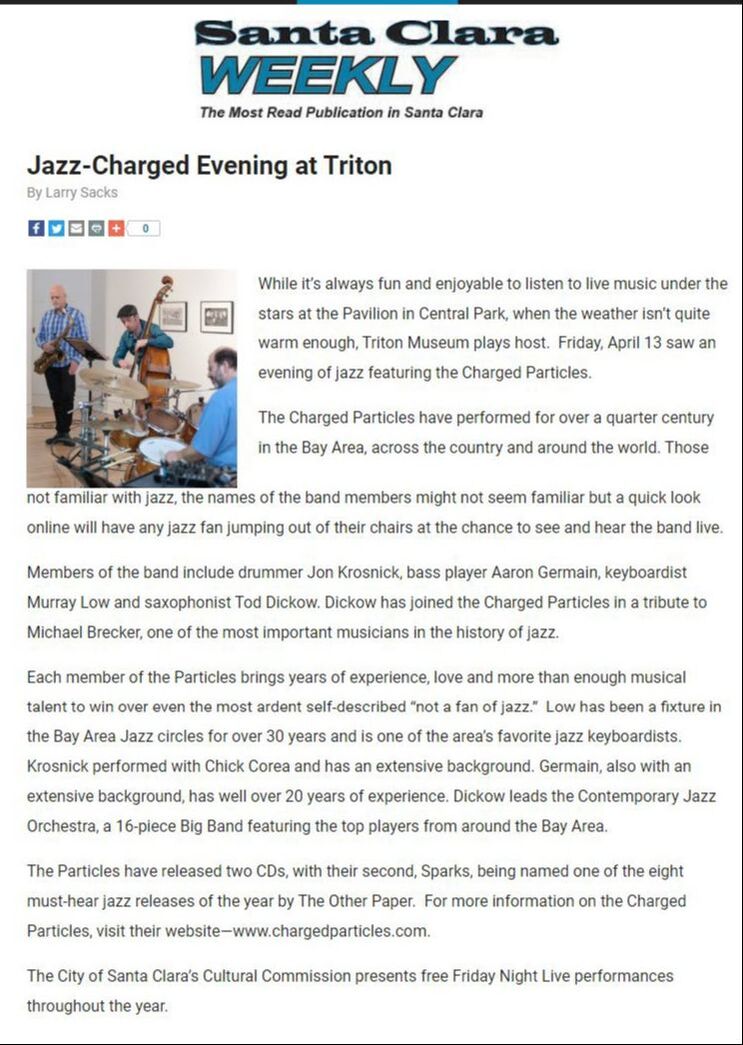 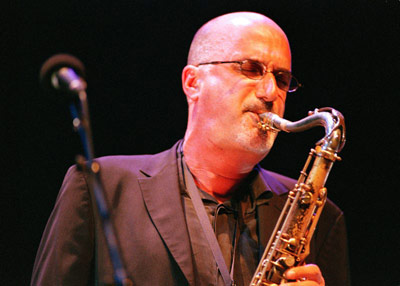 Michael Brecker was an innovator on the tenor saxophone whose unique voice and approach to the instrument influenced every performing saxophonist.   Winner of 15 Grammy Awards, he was a prolific composer and leader of a range of different bands, as well as a guest soloist with many other ensembles.  He was awarded some of the highest honors in jazz: an Honorary Doctorate from the Berklee College of Music and induction into Down Beat Magazine's Hall of Fame.

He led his own quartet and was co-leader of the Brecker Brothers (with his brother, trumpeter Randy Becker), Steps Ahead (with vibraphonist Mike Mainieri), the Pat Metheny-Michael Brecker "Special Quartet", and "Directions in Music", co-led with Herbie Hancock and Roy Hargrove.

He was a long-term member of the band of NBC's Saturday Night Live.

His musical voice was heard on more than 700 records and at thousands of live concerts around the world.

In January, 2007, the jazz world lost this giant to leukemia at the age of 57.
Michael Brecker's Website 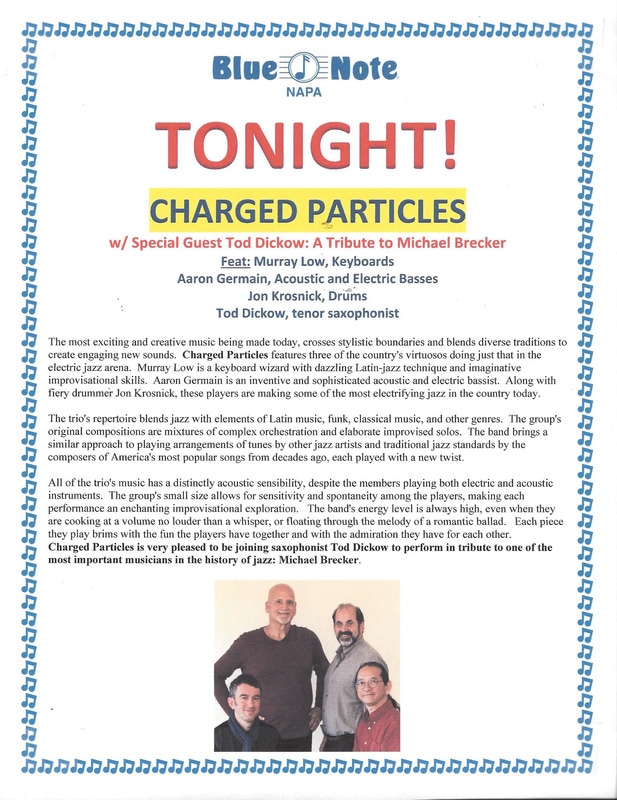 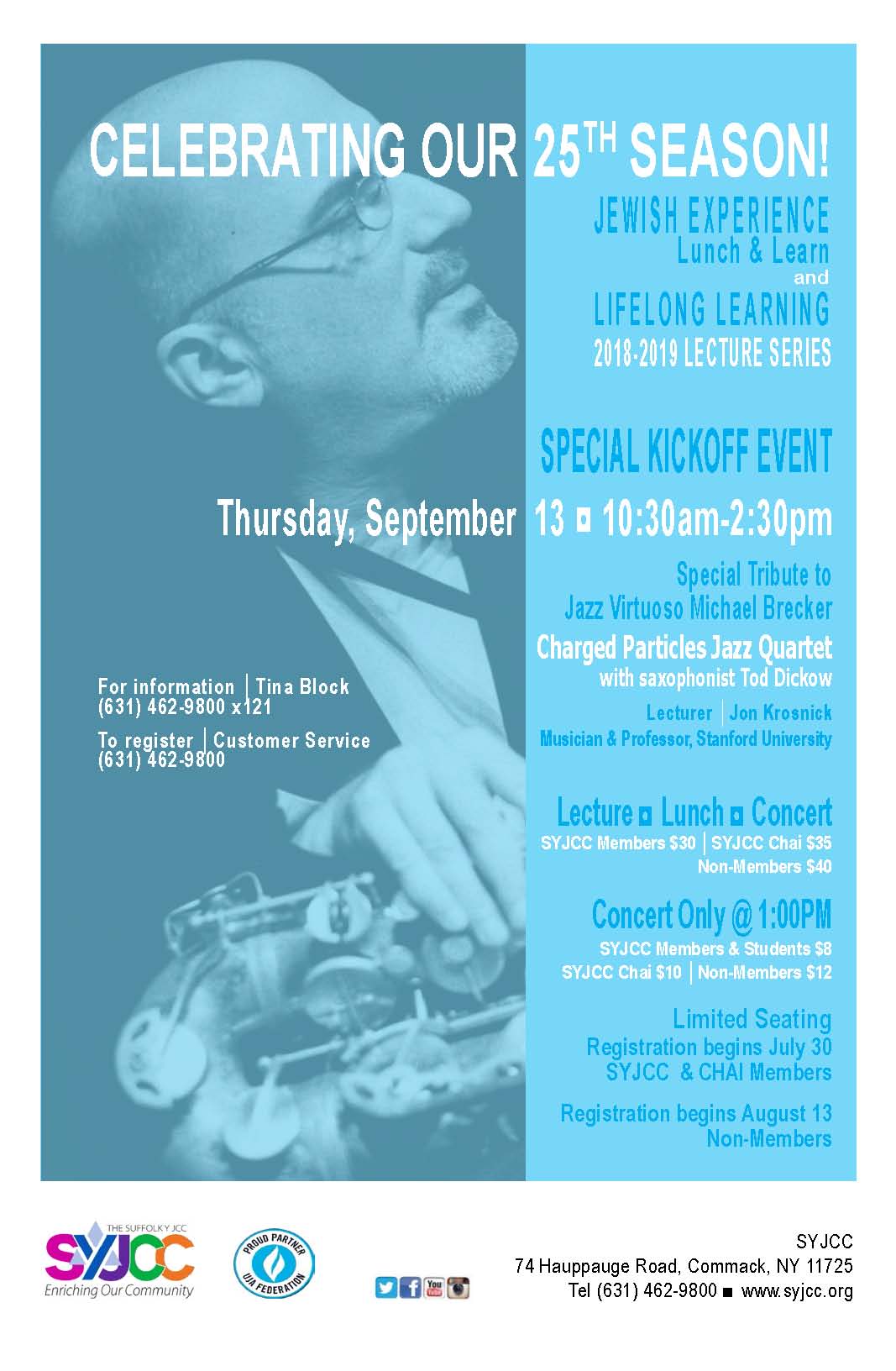 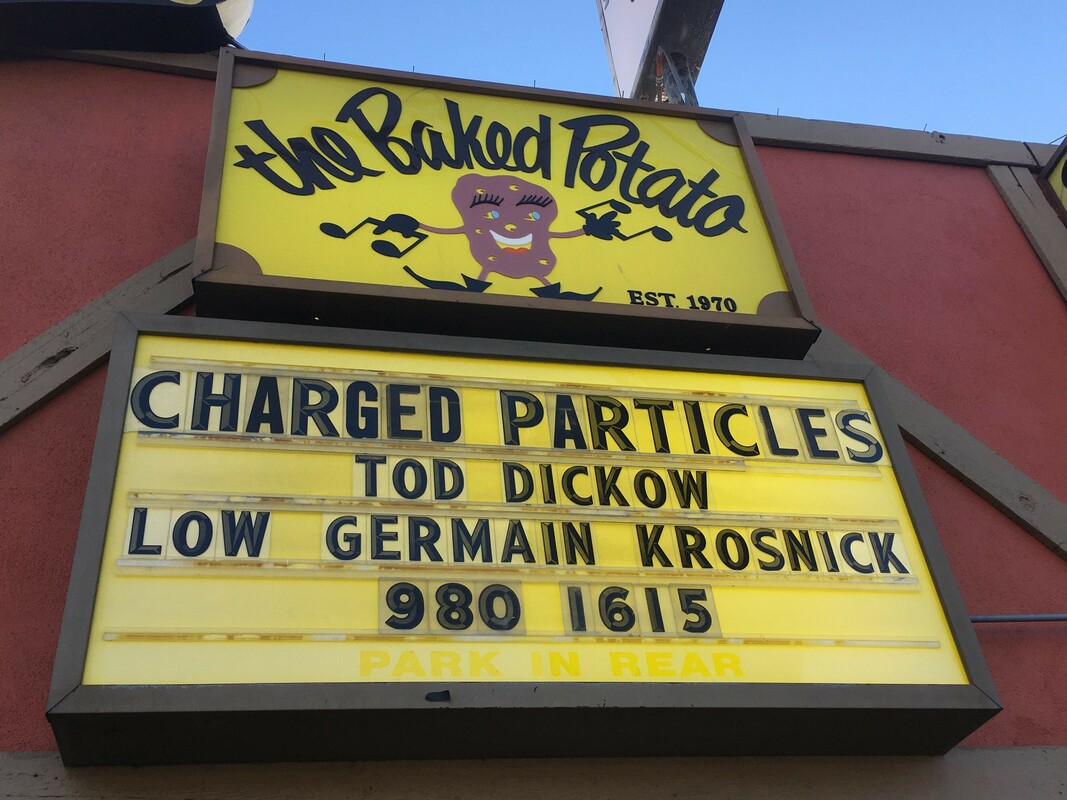 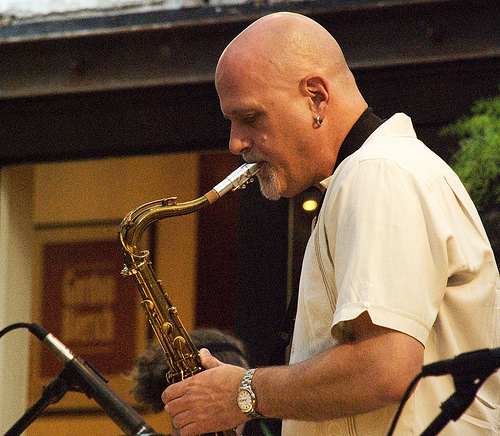 ​San Francisco based jazz saxophonist Tod Dickow performs in a wide variety of settings ranging from big bands to small combos adding a dynamic voice as an accomplished soloist and accompanist. Displaying a style steeped in the traditions of be-bop and modern jazz, with influences by masters such as John Coltrane, Wayne Shorter, Joe Henderson, Sonny Rollins, Dexter Gordon and more, and also heavily influenced by a crop of Coltrane devotees like Michael Brecker, Dave Liebman, Steve Grossman and Bob Berg.

He has appeared regularly with the Al Molina Sextet, Walley Scnalle's Bang, John Worley's "Miles of Blue" (a "Kind of Blue" tribute band), and the Latin Jazz group "Aryto".

Over the years, he has appeared with the Full Faith & Credit Big Band, The Brilliant Corners Tentet, The Full Spectrum Big Band, The James Leary Big Band, and the Bay Area Jazz Composers Orchestra.

In addition to leading his own small groups, he has led the Contemporary Jazz Orchestra, a great 16-piece Big Band, featuring the top players from around the Bay Area.  And he arranges music for big bands and small groups.

As is true for so many other jazz tenor players, Tod's playing and composing are powerfully influenced by Michael Brecker.  But Tod is unique in having captured the essence of Michael's spirit on the instrument, making Tod the perfect artist to perform Michael's compositions with Charged Particles to honor the late-great superstar of the genre.
Tod Dickow's Website

The Tod Dickow - Charged Particles collaboration features the following compositions that Michael recorded and performed and that were composed by him or by his close friend and collaborator Don Grolnick:

6  Both Sides Of The Coin (Fast Fusion Samba)

11  Talking To Myself (Straight 8ths)