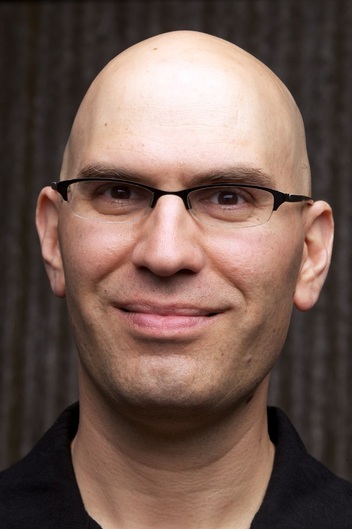 Jason Muscat was the original bassist in the third generation of Charged Particles when the band relocated from Ohio to California.  He was born in the Bay Area and has lived in San Francisco since he was 11 years old. Jason started playing bass when he was 14. He saved his pennies from a part-time job to buy his first bass from a JC Penny catalog. It didn't take long for him to develop a passion for the bass and an awareness that he needed a better axe!!!

Jason developed his skills in band class, where he won the school music award two years in a row. He graduated from Sacred Heart Cathedral College Preparatory and attended SF State University. Excited to explore a career in music, Jason studied for 2 years with Rick Giovinatso, student of Jeff Berlin. He then studied for 6 months with Michael Wilcox.

Jason spends most his time teaching bass in the city and co-leading a jazz trio, with Brandon Robinson on guitar and Brandon Etzler on drums. He also performs with local greats, Diz Dismore, Jeff Massanari, Wally Schanlle, Ray Sayre, Jimmy Sage, Cory Combs, Drew Waters, Lorn Leber, Russ Gold, Julie Homi, Jeff Marrs, Wil Blades, and Adam Shulman. He is also a member of one of the most in demand Bay Area R&B groups, Pure Ecstasy, and can be found playing for the popular musical comedy Menopause the Musical. Jason is also the bassist for City Church in San Francisco, under the direction of Karl Digerness.

Steppin’.  One of the greasiest funk and boogaloo band in the Bay Area lead by Oscar Meyers. Band members include Wil Blades, Steve Burke, Joe Cohen and Brandon Etzler.

Rob Hart Trio.  Rob’s trio plays a wide rang of music from straight ahead jazz to rock covers arranged for a jazz ensemble. 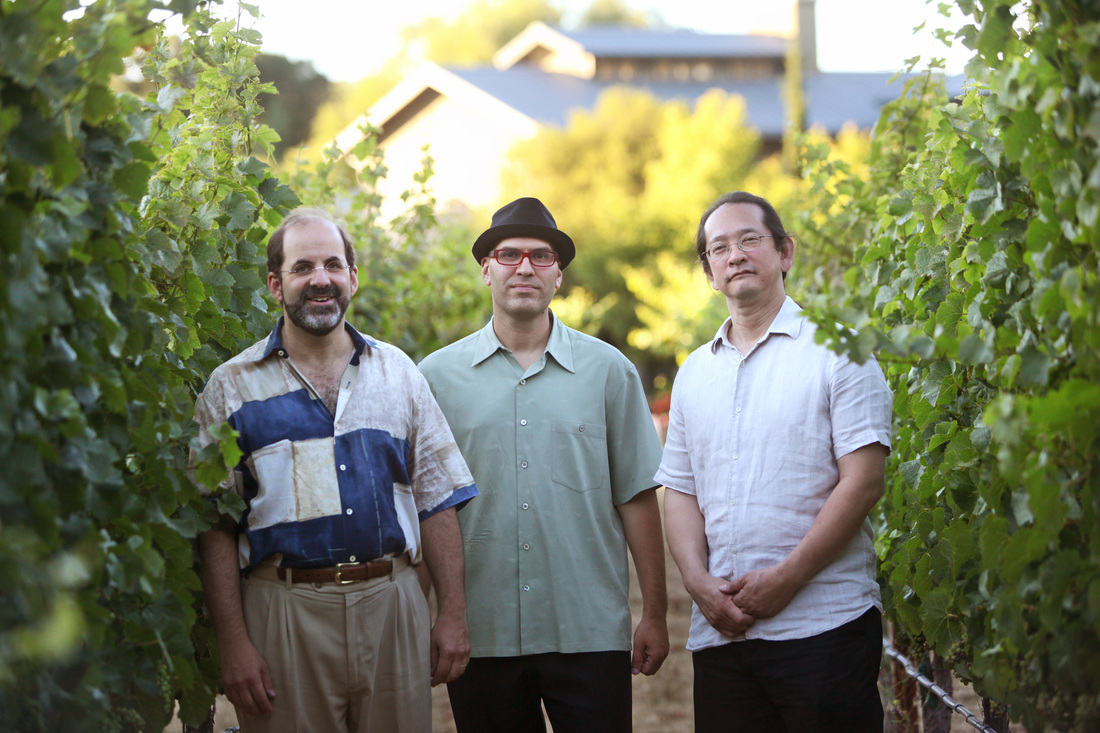 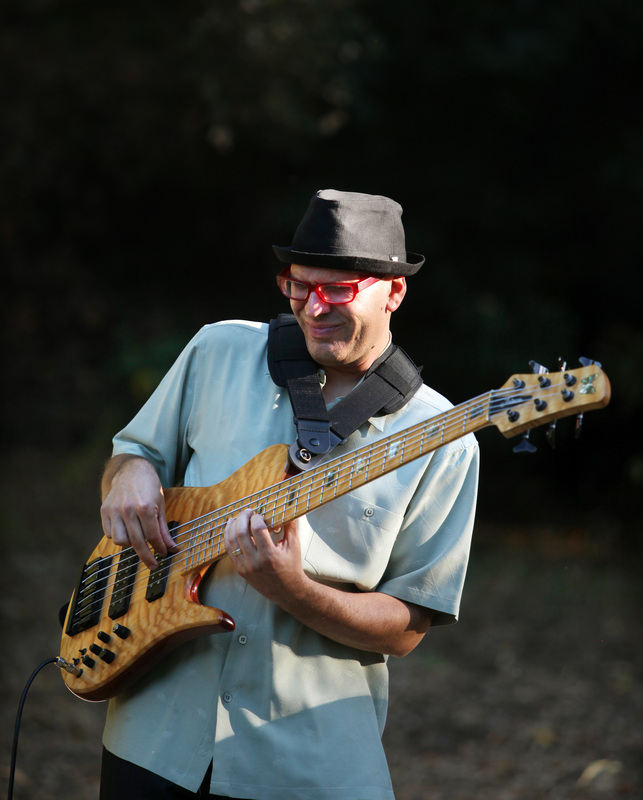 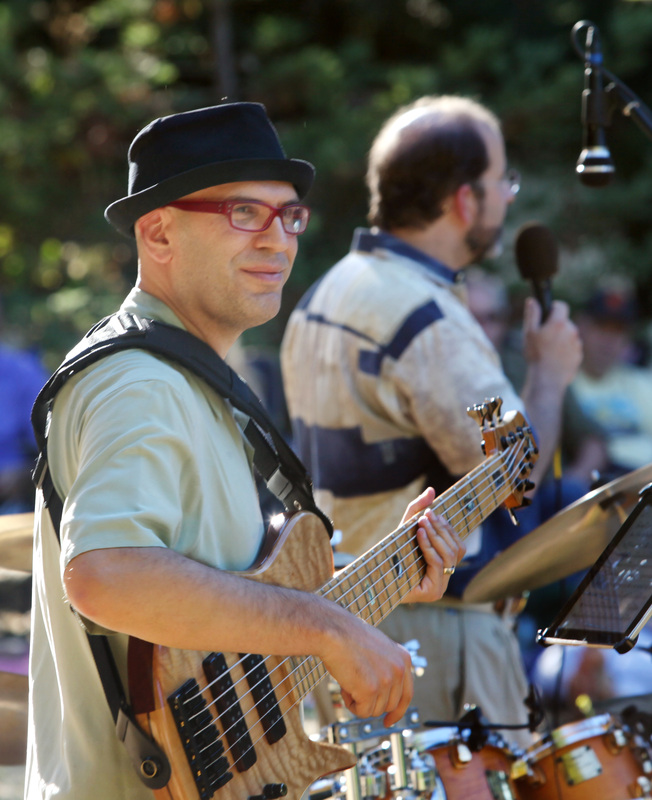 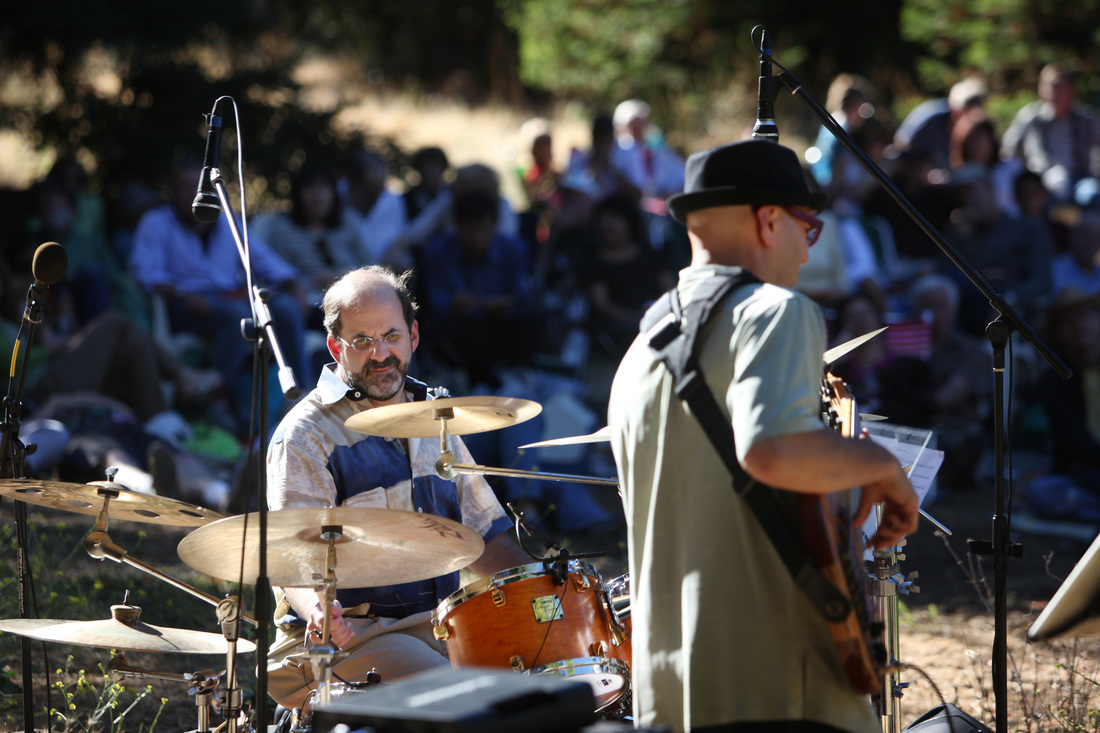 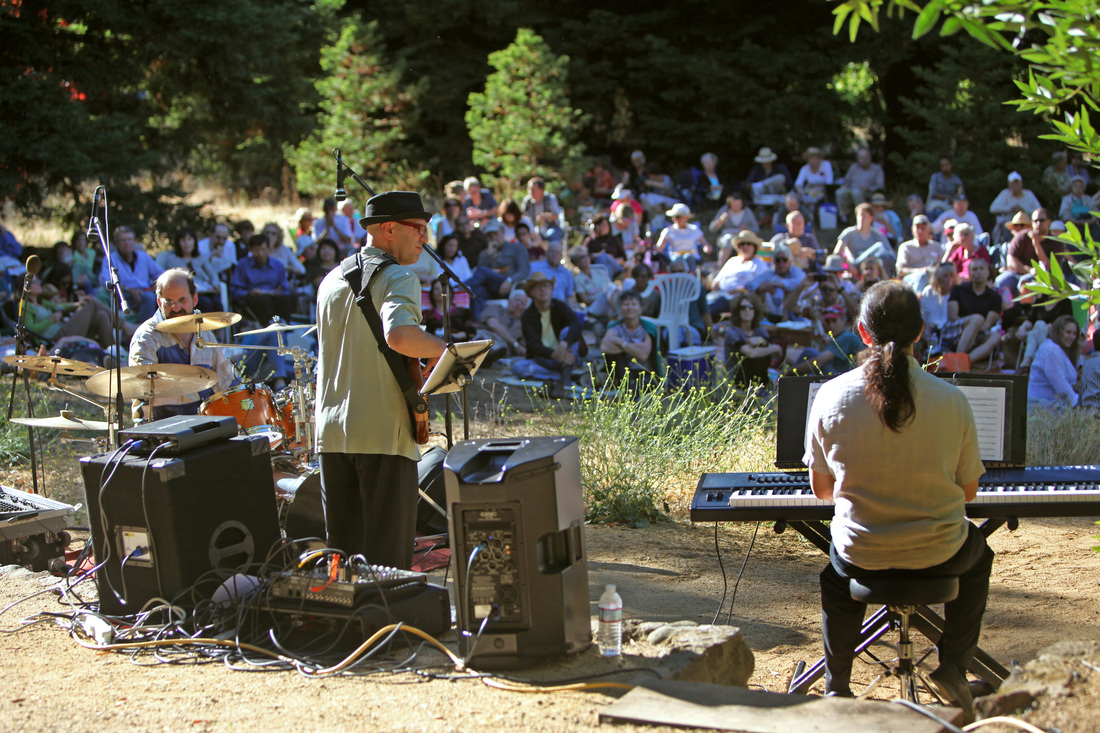 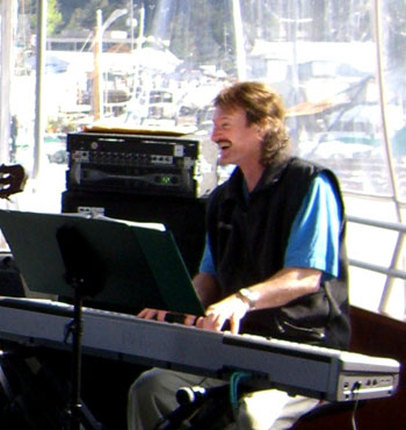 Frank Martin was born and raised in Oakland, California. At age 6 his grandmother bought a piano for his eleven year old twin sisters who were interested in learning to play. “I so remember that first time touching the instrument” says Frank. “I felt an amazing connection and passion for the sound it created. It’s still the exact feeling I get each and every time I play the instrument.” He began his piano studies at age seven and in high school started his first band with school mates called “The Trend” performing for mostly school dances and eventually opening for rock bands like “Country Joe and the Fish,” “Sopwith Camel,” and the “Young Rascals.”

During those early years connecting for lessons with jazz pianist Don Burke exposed him to artists such as Miles Davis, Bill Evans, Toots Thielemans, and Dave Brubeck, which began a lifelong love for jazz.  Says Frank, ”I remember Mr. Burke teaching me songs like “Take Five,” Blue Ronda ala Turk,” and “Take Ten” and how I was taken by rhythm and especially songs in odd meters.”

During his college years at Hayward State University he performed with the school big band as well as small ensembles. In his senior year he performed with the “Hayward State Nonet”, a nine piece jazz group that played original compositions, a number of which were his compositions. At the Reno Jazz Festival, where they received 1st honors, they also performed a piece by the “Four Freshman” where he along with 3 others in the band came out front and sang the original vocal “Four Freshman” arrangement of “Spring Isn’t Spring Without You”.

While still in college a friend told him he had to come and hear this great piano player performing at a club in Palo Alto, CA called “In Your Ear.” That’s where he connected with his next jazz teacher, Art Lande. Much was learned from this great teacher/player including avant-garde playing, improvising through complex chord changes, and modal playing. Also time was spent exploring composing with pictures as well as numbers.

During that time as well as post Cal-State Hayward, he played in countless pop/rock bands performing in bay area clubs 5+ nights a week. At one point joining a new band called “Visions” that played originals, many in odd time signatures.  Composing and arranging for these and other bands became a huge part of his passion.

In the late 70’s an opportunity appeared via a recommendation by guitarist Steve Erquiaga to join the legendary alto saxophonist John Handy’s band. John was looking for a player who could play jazz, some odd time music, as well as groove music, and someone who could play keyboards and synthesizers. A perfect fit at the time given he was deep into the Minimoog, fender rhodes, and clavinet. Very shortly after that first musical meeting with John Handy, the band was in Los Angeles recording an LP for Warner Brothers Records called “Handy Dandy Man”, followed by a US Tour. That tour had them opening for artists like George Benson, Al Jarreau, and The Crusaders, to name a few.

Next came a call from fusion drummer Narada Michael Walden to join his band. He had just moved from the east coast and wanted to put a band together. The two of them got together and played for an afternoon in San Francisco and made an instant connection. Narada had recently left the Mahavishnu Orchestra, as well as Weather Report, having just recorded “Black Market”, and wanted to continue playing fusion as well as pop/rock/R&B where he could sing, as well as produce artists. That led to many records with him, as well as pop records with artists like “Sister Sledge”, Angela Bofill, George Benson, Dianna Ross, Whitney Houston, Lou Rawls, Steve Winwood, and many others. USA band tours followed, opening as well as headlining for artists such as Chaka Khan, the Brothers Johnson, Patti LaBelle, Grover Washington Jr., Dianna Ross, Peabo Bryson, Rick James, and many others.

Shortly after recording with Angela Bofill came an offer from her to arrange a number of her songs for big band to open shows for Bill Cosby in Atlantic City as well as Las Vegas.

“I remember that offer” says Frank. “She asked if I conducted as well as arranged for big band … and I answered absolutely! Except I actually never did either. Quickly I called my good friend and arranger Wayne Wallace and said HELP!. We quickly co-arranged the charts and off I went to Atlantic City.  I’ve always been a believer of just going for it taking chances. Opportunities don’t necessarily keep coming around.”

Not long after, the two of them went to the Philippines and toured with great local musicians for a month throughout Manila and Cebu.

Next, an offer came to move to New York and travel as her musical director. It was a move of only 6 months, the duration of the first tour, but the musical relationship between the two continues to this day, although Angela currently is recovering from her second paralyzing stroke.

Also during the mid 80’s, 2 years were spent playing on a TV Variety Show called “THE AFTERNOON SHOW.” It was much like the original Letterman Show  that featured a quartet that backed up whoever happened to be a guest on the show. Much experience was gained backing up artists like Mel Torme, the Nicholas Brothers, Cab Calloway, Albert King, B.B.King, Herbie Hancock, Jeffery Osborne, and many others.

The connection with Narada Michael Walden, which continues to this day, led to many shows such as the “RHYTHM & BLUES PIONEER AWARDS” and the “SPORTS IMAGE AWARDS” where the band backed up artists like “The Flamingos, The Cadillacs, Bo Diddley, Johnny “Guitar” Watson, Johnny Taylor, Sam Moore, Betty Everett, The Chantels, and Philip Bailey, where Frank acted as musical director for Narada Michael Walden.

For over 20 years, he has been part of the Brazilian band the “Netoband” led by guitarist Jose Neto from Sao Paulo, Brazil. For 16 years the band was invited to play at London’s legendary “Ronnie Scott’s Jazz Club”.

In 2003, vocalist Patti Austin, who he had been working with as her musical director, asked him to go to South Africa and put together a band of local musicians to perform a concert sponsored by the Mandela Family.  “That was truly a great experience,” says Frank. “The musicians there were so gracious and talented, taking me in like family and playing and singing as good if not better than Patti’s USA bands.”

Through the years, he has performed with John McLaughlin, the Joe Farrell Quartet, the Richard Bona Band, Flora Purim and Airto Moriera, Robben Ford, and many others.

Operating his own recording studio in San Rafael, California, he has been active in producing and arranging for many artists, including pop/jazz singers Al Jarreau, Lisa Fisher, and Angela Bofill, as well as Indie artists Karen Blixt, Ellen Honert, Nicholas Bearde, Molly Holm and many others. “I love producing artists, especially those with a vision and a dream.” Frank goes on to say: “And as producer, I’ve been able to call those I’ve admired for years to join me in the studio … artists like Randy Brecker, Dori Caymme, Joey DeFrancesco, Patrice Rushen, Abraham Laboriel, Alex Acuna, the Turtle Island String Quartet, Buddy Montgomery, John Pena, and Pedro Eustache.”

As a clinician/teacher, he has been on staff at the University of California at Berkeley, as well as the Jazzschool in Berkeley, California, teaching classes in arranging, composition, rhythm, piano,and improv, as well as leading combos. He has also taught at summer music camps for kids as well as adults, such as the Lafayette Summer Music Workshops, Jazz Camp West, and San Jose’s “Jazz Goes to College”.