The most exciting and creative music being made today crosses stylistic boundaries and blends diverse traditions to create engaging new sounds.  Charged Particles features three of the country's virtuosos doing just that in the acoustic and electric jazz arena.  Murray Low is a keyboard wizard with dazzling Latin-jazz technique and imaginative improvisational skills.  Aaron Germain is an inventive and sophisticated acoustic and electric bassist.  Along with fiery drummer Jon Krosnick, these players are making some of the most electrifying jazz in the country today.

The trio's funky Latin jazz repertoire, blending in elements of classical music, mixes complex orchestration with freewheeling improvisation.  The band brings a similar approach to playing their own arrangements of jazz standards, each played with a new twist.

All of the trio's music has a distinctly acoustic sensibility, despite the members playing both acoustic and electric acoustic instruments.  The group's hallmark is sensitivity and spontaneity among the players, making each performance a spontaneous group exploration.   The band's energy level is always high, even when they are cooking at a volume no louder than a whisper, or floating through the melody of a romantic ballad.   Watching the group, it’s obvious that they have fun playing together and admire each other’s musical instincts. 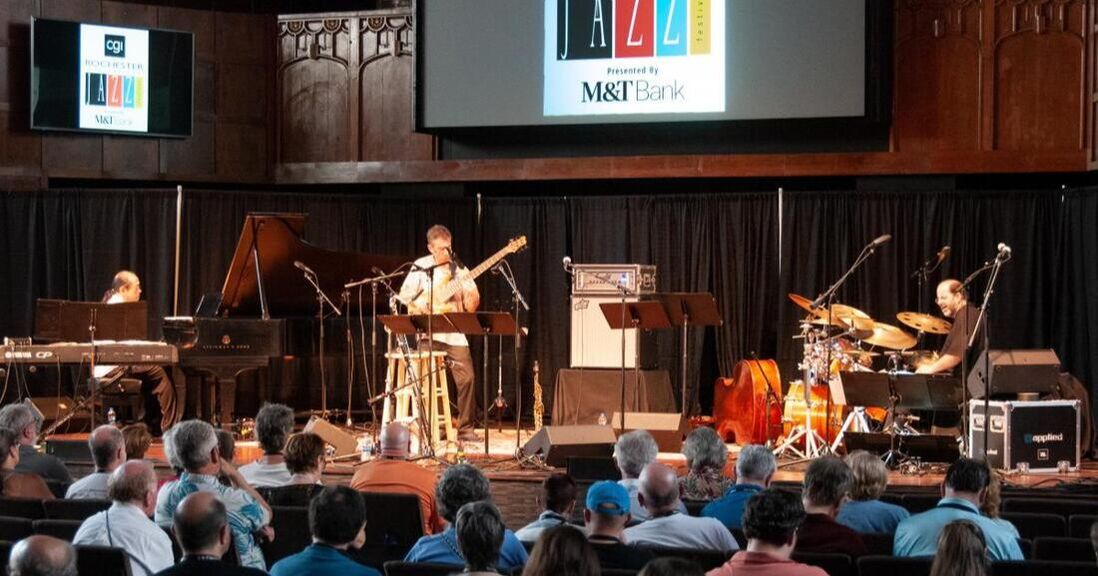 Murray Low, Aaron Germain, and Jon Krosnick at the Rochester International Jazz Festival 2019 (photo by Marcie Ver Ploeg)
Charged Particles made its public debut on National Public Radio Affiliate WDET's live performance program, "Detroit Jazz Alive", originating in Detroit, Michigan.  The group's one-hour live performance drew wide attention and opened the door to performances at festivals and clubs around the world.  In addition to its own headline performances, the band has opened for national recording artists such as Al DiMeola, Stanley Jordan, Yanni, and the group has had such international mega-star drummers as Peter Erskine and Dennis Chambers and percussionist Doc Gibbs sit in with them.
​
In 1994, Charged Particles released its first compact disk, on Schoolkids Records.  The CD received airplay on over 200 jazz radio stations nation-wide and was praised by national jazz critics in such outlets as Jazziz Magazine, Jazz Times Magazine, Jazz and Blues Report, Pulse! Magazine, and many more.  A performance by the group was included on the compilation CD, The Columbus Collection, featuring outstanding jazz artists from Columbus, Ohio, and released in 1996.  The group’s second CD, “Sparks”, was released in late 2002 on BOPO Records, received airplay on nearly 100 radio stations within two weeks of its release, and has gained attention from critics in many American publications and in magazines as far away as England, Denmark, and Japan.  “Sparks” was named one of the eight “must-hear” jazz releases of 2002 by The Other Paper, and the opening track from “Sparks” was included on the “Jazziz on Disc” sampler CD mailed to 85,000 subscribers of Jazziz Magazine in March, 2003.

In 2001, Charged Particles added a fourth member to its performing ensemble: master percussionist Ron Hope.  Ron brings a sparkle to the band's performances and has added strong elements of African and Latin musical roots to the group's performance repertoire.  Ron consistently delights audiences with his charismatic on-stage personality and propulsive drumming.

When Caleb Hutslar moved to Sweden, Jim Maneri sat in the keyboard chair for a period, and then a new generation of Charged Particles was born, featuring the world-renowned Kim Pensyl on keyboards and the amazing Andy Woodson on bass.  Twice named one of Billboard's Top-20 Contemporary Jazz Artists of the Year, Kim is a prolific composer and an amazing performer.  Andy is also a great composer and band-leader who brings energy to the electric bass reminiscent of Jaco Pastorius.  With this personnel, the band performed around Ohio and toured the country as well, including performances in North Carolina, Michigan, and Chicago.

In 2011, the third generation of Charged Particles was born in California.  The west coast trio began with Murray Low firing up the keyboards and Jason Muscat on electric bass.  When Jason joined the touring band "Tainted Love", Aaron Germain took over blazing on the acoustic and electric basses.  Playing new original compositions, as well as the long-time original repertoire of the band and compositions by their favorite contemporary composers, Murray, Aaron, and Jon are busy gigging.

Highlights for the band in recent years have been a performance on the main stage of Yoshi's San Francisco jazz club accompanying French Vietnamese guitarist Nguyen Le playing his compositions, an appearance accompanying vocalist Kevyn Lettau singing her compositions at Cafe Cordiale in Los Angeles, and performances in the Los Angeles area with keyboardist David Garfield.

The band has been collaborating regularly with powerhouse vocalist Rocío Guitard.

An exciting innovation for the group has been its collaboration with powerhouse reed player Paul McCandless (of the famed super-group Oregon) playing his own compositions.  The group has been appearing as headliners at the famed jazz clubs Birdland (in New York City), Blues Alley (in Washington, DC), Yoshi's (in San Francisco), and Nighttown (in Cleveland), as well as at the San Luis Obispo Jazz Festival, the Stanford Jazz Festival, the Erie Blues and Jazz Festival, and other venues around California and the east coast.

Another exciting project is a celebration of the music of tenor saxophone great Michael Brecker, featuring Bay Area tenor saxophonist Tod Dickow.  The group has been bringing alive Brecker's music and spirit.  Their CD of the music gained acclaim in numerous jazz publications world-wide, including lengthy feature articles in Jazziz magazine and Jazz Times magazine, plus airplay on numerous radio stations in the U.S. and abroad.  The trio has been touring with Dickow around the U.S. and in the U.K., and a recent sold-out show featured Brecker's brother, acclaimed trumpeter Randy Brecker, at the famed jazz club Birdland in New York City. 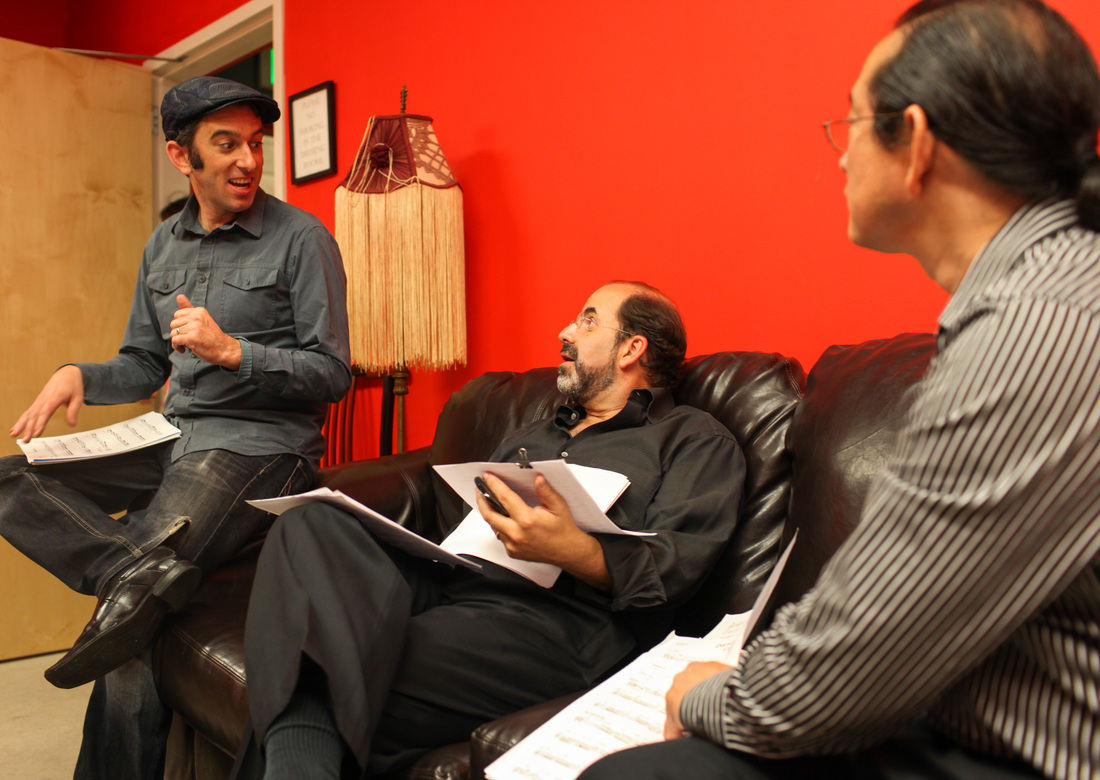