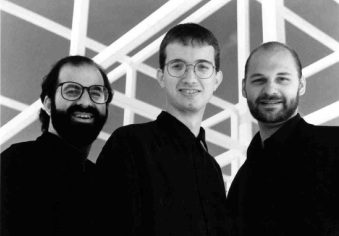 Caleb Hutslar began to study piano at age 7, inspired by his parents, both of whom are musicians, and by listening to their extensive record collection. Although Caleb was an accomplished pianist by age 12, there were no opportunities for pianists in his school concert band and orchestra. Consequently, he taught himself french horn so he could join those ensembles.

While in high school, Caleb attended Columbus's Fort Hayes Career Center for the Performing Arts, where he first began to play jazz. He also took courses in music theory and composition, and he performed in choirs, jazz ensembles, and back-up groups for musical theater productions. At the same time, Caleb began to take classical piano lessons from George Haddad and jazz piano lessons with Dave Wheeler.

In 1988, Caleb enrolled at the Ohio State University, where he has studied classical piano (with Sylvia Zremba, Donald Gren, And Andre LaPlante) and jazz piano (with the great Hank Marr). As a piano performance major in the music school, Caleb has performed with the OSU Jazz Lab Ensemble and has studied theory, composition, ear training, arranging, music history, and counterpoint. He has received a number of awards for his playing, including the George Haddad Scholarship, the OSU Music Scholarhip, and the Ohio State Board of Education Award for Musical Excellence.

In addition to Charged Particles, Caleb has performed in central Ohio with State of Mind (an electric fusion group) and After Hours (an acoustic jazz quartet). Caleb appears on the debut CD by After Hours, released in 1994. In all these settings, his playing reflects the influence of pianists Chick Corea, Art Tatum, and Oscar Peterson.

Mike Rak, nominated as best jazz instrumentalist in the first annual Columbus Music Awards, is a multi-talented instrumentalist who began playing trumpet at age 11 in his school concert band. When the band needed a tuba player for competitions a year later, he took up that instrument for three years. And when the shool formed a jazz band and needed a bass player, he filled that slot as well. Shortly thereafter, he began to play guitar, and during his junior year at New Albany High School, he taught himself to play euphonium as well!

Mike won numerous awards for his high school musicianship, including the award for the school's most valuable jazz player. Based on these accomplishments, he matriculated at OSU to continue his musical studies. He took courses in music theory, history, ear training, and arranging, and he studied bass with Paul Robinson and Roger Hines. Mike played with the award-winning OSU Jazz Ensemble, performing at the Notre Dame Jazz Festival, the Cincinnati Jazz Festival, the Tri-C Jazz Festival, and the Mexico City International Jazz Festival. Mike's outstanding musical accomplishments at OSU were recognized when he was awarded the Tom Battenberg Jazz Scholarship. 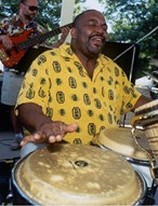 Ron Hope (Congas and Percussion) began playing drums under the instruction of Master Drummer Tony West at age 10 in the Paul Lawrence Dunbar Center for African Study.  While studying with Mr. West, Ron began performing with Dance Instructor and choreographer Leeland Johnson, who was engaged with an Afro Caribbean dance company at the time.  And as a result, Ron spent much of his preteen and teen years working with African, Caribbean, and jazz dance troupes.  At the age of 16, Ron began to branch out by performing in jazz clubs with local musicians in the Columbus, Ohio, area, including the Taj Mahal and the Oasis Lounge.

In 1977, Ron joined the U.S Army as a logistics technician, and during his off duty hours, he formed his own band named Collage, made up partly of musicians from the 5th Infantry Division Marching band. This band performed in clubs in and around Louisiana and Texas. After his honorable discharge in 1979, Ron began playing with dance troupes in and around Columbus, and soon, he became lead drummer in the African Dance troupe, the Uhuru Dancers.  Ron also worked with the Dayton Contemporary Dance Company, the Pittsburgh Contemporary Dance Company, the Olu Mekinde Dancers, Tony West and Imani, and Is said and Advance Party.

During the early 1980’s, Ron performed and recorded with Bobby Taylor (who worked with Barry Gordy and the Timeless Legend) in a group that included the bassist Foley (who performed with legend Miles Davis).  In the mid 1980s, Ron played with Arnett Howard and the Creole Funk Band, performing just about every day of the year for adoring central Ohio audiences.  Since then, Ron also worked with Umberto Rameriz, Gali Sanchez, Los Munez Quitoes of Cuba, April Berry &  Ballet Met, Dr Glory Van Scott, Victor Casanova of Peru, and jazz guitarist Wilbert Longmire.  Ron is former co-leader of Sambateria and has performed with Yumbambe and Bobby Floyd.

Ron is currently the director of the Short Stop Youth Center Drum Dance and Theater Ensemble and co-leader of the (Deep) Blue C.  And he recently formed his own band named .... Ron Hope.  He also performs these days with Magrugada and with Ibada and with Umar Bin Hassan. 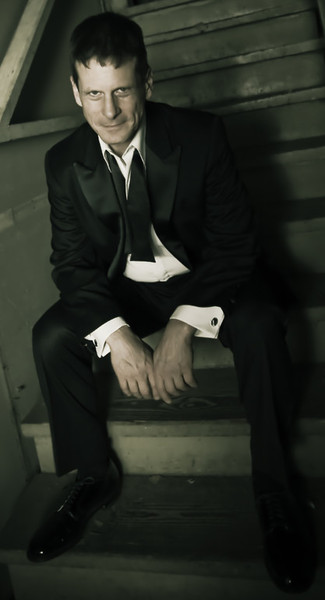