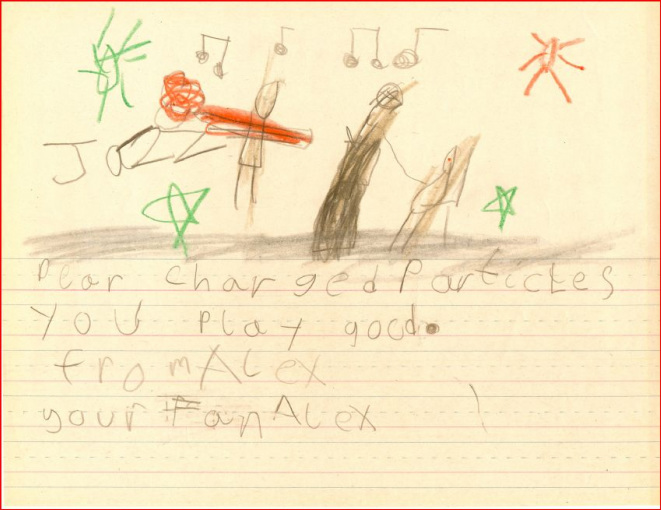 1.  Introduction to the Sound of Jazz

The workshop for young children begins by introducing them to the sound of jazz as the trio plays an original composition by one of the band members in the salsa style.  The song begins with a melody, transitions to a piano solo, then a bass solo, then "trading fours" between the drummer and the other musicians, and finally the melody again.  The infectious rhythm of the piece gets even the youngest children dancing in their seats.


2.  Introduction to the Musicians

Each of the musicians introduce themselves and say a brief word about the instruments they play.  Then Jon briefly describes the history and present of the band's performing and touring.

Next, Jon explains the rhythm of samba music, which came from Brazil and inspired new directions in jazz in the 1960s.  Jon demonstrates first the "heartbeat" of a samba on the bass drum, then shows how the heartbeat gets "decorated" by improvised accompaniment on the snare drum.  In this way, a single drummer mirrors the sounds produced by a troop of drummers playing samba music in the streets of San Paulo.

Then as Jon plays the samba rhythm on the drums, Aaron joins by playing a matching samba line on his upright acoustic bass.  Jon and Aaron play the same rhythms, but Aaron adds pitches.

3.  The Children Become a Choir

Next, Jon tells the children that they are going to get the chance to sing samba music with the band.  To do so, the children begin by singing "Twinkle, Twinkle, Little Star" all together.  Then they sing it a second time, but this time clapping a quarter note rhythm.  Then they sing "Twinkly, Twinkle" one more time, but this time, the trio of piano, bass, and drums accompany the chorus of children with a samba background.

Jon explains that the unique distinguishing characteristic of jazz is improvisation, the fact that the musicians are making up what they're playing in real time during most of the songs they play.  He shows the children the written music that the musicians read and explains that it's more of  a "road map" than a "script".  Jon explains that all the children are experts at improvising, because throughout every day at every minute, they do and say what they want, making it up at the moment, rather than planning out what they will say and do in advance. He explains that if any of the children choose to act in a play in the future, they'll have to memorize their lines and moves and say and do the same thing during every performance.  But in daily life, the children improvise, just as the jazz musicians do.

Then it will be time to introduce the children to a new style of jazz: funk.  Jon explains the heartbeat of funk, played on the bass drum and demonstrates the decoration he plays around the heartbeat.

Then the band plays "Mobius Trip", a funk tune written by pianist Murray Low.  The fun rhythmic pulse always inspires lots of foot tapping, and the title of the tune allows Jon to explain to the audience the mathematical concept, a Mobius Strip."

6.  Explanation of the Instruments

Next, Jon explains all the parts of the drum set, showing how many different sounds he can make, and explaining that the goal of all good drumming is independence of limbs, allowing his feet and hands to all operate as if they are completely separate from each other.  Aaron explains how his acoustic and electric basses make sounds, and Murray does the same for the electronic keyboards.

Finally, the workshop ends with a performance of another samba that features an extended drum solo.  Jon explains beforehand the rhythm at the core of salsa music.  Then he explains that the drum solo will begin very, very quietly and build slowly up to a great level of excitement and that he'll be making up the entire solo as he does it - having no idea in advance of what he'll play.  At each moment, he'll be listening to what he's playing and deciding what would sound good and make sense to play next.  Even he will be surprised by what happens sometimes.  The song will end with an explosion of excitement from all three musicians in unison.

7. Epilogue: Testing Out the Drums

After the workshop is complete, interested children are invited to come up and have their photos taken while they're testing out the drums after standing in line to wait their turn for a go.   Smiles abound as children watch each other trying out this new experience.