on the main stage at Yoshi's Jazz Club
San Francisco on October 31, 3012


"What a treat it was to see such
an amazing group of musicians
on our stage.  Pleased is an
understatement.  I was more
overwhelmed by the show!"
​
Derek Hunter, Yoshi's Talent Buyer

After enlarging a picture, click on the arrow just inside the right edge
of the picture to advance to the next picture. 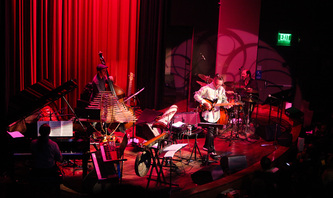 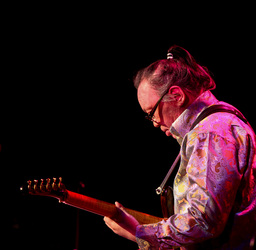 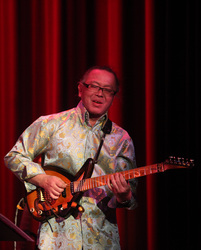 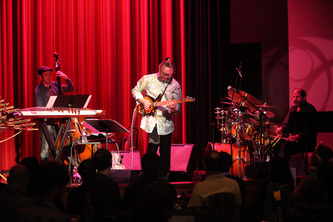 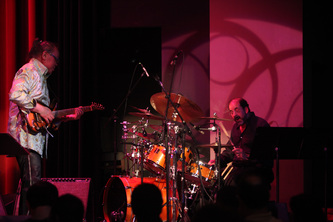 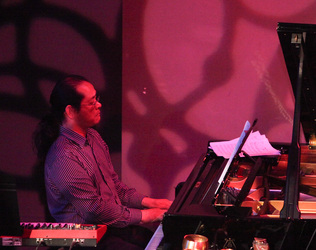 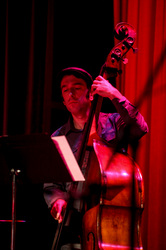 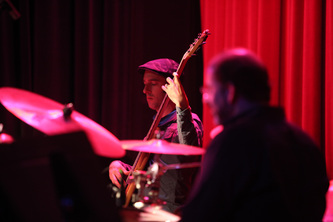 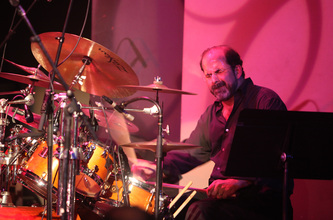 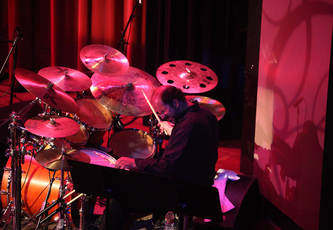 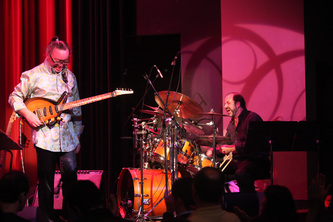 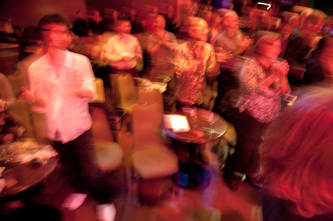 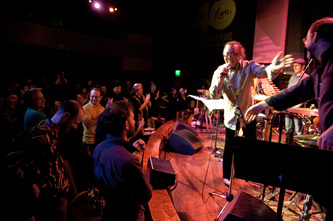 Lê's work also deals with programming synthesizers, effects and computers, as well as writing orchestral pieces : "PROCESSOR"  composed, arranged, and recorded on the CD "O.N.J. 87" & "LUNIK II" ,co-arranged with  Dominique Borker and performed by the O.N.J. in 1989.
In September, 1989, he recordsedULTRAMARINE's 2nd album "DÉ" , and in May, 1090, his  first album as  a leader : "MIRACLES"  recorded in the U.S. with Art Lande, Marc Johnson, and Peter  Erskine.  At  the same time, he worked  with such musicians  as  Michel  Portal,  Miroslav  Vitous, Trilok Gurtu,  J. F. Jenny Clarke, Aldo Romano, Daniel Humair, Dewey Redman, Andy Emler, Jon Christensen, Nana Vasconcelos, Glenn Ferris, Christof Lauer, Paolo Fresu, Kenny Wheeler, John Taylor , and more.
In May, 1992, after a month  tour with Paul McCandless on  winds, Art Lande on piano,  Dean Johnson on bass, and Joël Allouche on drums, he recorded his second album ZANZIBAR, which won an award from Télérama. In January, 1993, he recorded "INIT", a trio with André Ceccarelli, François Moutin, and Bob Berg, while setting up a new band focussed on the music of Jimi Hendrix,  with Corin Curschellas (voc), Steve Argüelles (d), Richard Bona (b).

In April, 1994, he was the guest soloist on "The New Yorker", a suite by Bob Brookmeyer, with Dieter Ilg (b) & Danny Gottlieb (d). With these two musicians, he created his first trio and recorded "MILLION WAVES" in December, 1994. About this CD, Télérama wroite : "This trio brings him to some musical spaces which he had not even imagined, & which are pure poetry".
He later played in a trio with Michel Benita(b) & Peter Erskine (d), recording on Michel Portal's new album with Ralph Towier (g), & worked with Ornette Coleman on one of his contemporary music pieces, "Freedom Statue".

In June, 1995, he was poerformed with the WDR Big Band in "Azure Moon", with the Yellowjackets and Vince Mendoza. In July, 1995, in the Stuttgart Festival, he was one of the guest guitarists to celebrate the "Universe of Jimi Hendrix", beside Trilok Gurtu, Terry Bozzio, Cassandra Wlison, Jack Bruce, Vernon Reid, David Torn, Victor Bailey, Pharoah Sanders, and others.

He  recorded 2 CDs with Paolo Fresu’s quartet:  Angel  (2/98) & and Metamorfosi  (4/99). In May, 1998, he recorded  Maghreb & Friends», an exploration of Maghreb musical traditions and a deep collaboration with Algerian musicians.  "Far from a false world music, N. Lê simply touches, with force and intensity, to universality " F. Medioni.  Lê produced the first CD of Huong Thanh, "Moon & Wind", entirely done in his home studio. He also has been nominated for the  Victoires de la Musique 1999 award.

His  CD,  BAKIDA , featured his regular trio with Renaud Garçia Fons (b) & Tino di Geraldo (perc, dr) plus guests from all over the world, including Kudsi Erguner, Chris Potter, Carlos Benavent and others.  This CD has been voted "best jazz album of the year" by "CD Compact" (Spain). ELB, a  trio CD recorded in Rainbow studios, Oslo, features Peter Erskine and Michel Benita. Le toured with Terri Lyne Carrington's band, with Geri Allen, Matt Garrison, and Gary Thomas, and played with Maria Schneider.

Sept 2002 : 2nd CD of Huong Thanh « Dragonfly ». In June, 2002, he was invited by the Metropole Orchestra (NL) to play his music arranged by Vince Mendoza.« Purple, an album celebrating Jimi Hendrix, was released in September, 2002. That month, it was number 1 on the charts of UK magazine "Jazzwise".

"Mangustao", Huong Thanh's 3rd album,  released in January. 2004, was awarded as "Choc de la Musique" by French magazine "Le Monde de la Musique". In March 2005, he release of "Walking on the Tiger's Tail", an albummade  with his great friends Art Lande, Paul McCandless, and Jamey Haddad.  “A universe where the alliance between acoustic and electric, improvisation and writing, inner delicacy and virtuosic expressivity reach the ideal balance.”(Le Monde).

Several projects were built in 2006 : the score writing of "Le Sheitan", a movie by Kim Chapiron with Vincent Cassel, and Homescape, a very electronic, improvised, and mystical recording in duo with Paolo Fresu and Dhafer Youssef, all done at home, #1 in « Jazzwise » April 2006 charts; the score for the Vietnamese movie "Saigon Eclipse" by Othello Khanh; the recording of "Mozart" last Uri Caine's album; a 13-gig tour in USA with "Tiger's Tail" quartet, thanks to a CMA/FACE grant; two "classical" compositions commissioned by the Ahn Trio & the Laguna Beach Fest in LA.  Lê was unanimously awarded as the guitar "Django d'Or" 2006.

In 2007, after tours in US and China, he released "Fragile Beauty", the 4th album with Huong Thanh «Simply an album that captures the heart from the first note and leaves it hungering for more as the last one fades» (All That Jazz). In 2008 he records "The Othello Syndrome" for Uri Caine, "Blauklang" for Vince Mendoza's & also « Dream Flight » a new ELB album, with guest Stéphane Guillaume on sax. A new album  comes out in oct 2009: SAIYUKI, an asian trio with Mieko Miyazaki (koto) & Prabhu Edouard (tablas) & special guest Hariprasad Chaurasia (flute). He’s the mixing engineer & co-producer of  Dhafer’s Youssef «Abu Nawas Rhapsody», Céline Bonacina’s «Way of Life» & Mario Canonge «Mitan». «Signature Edition», a double-CD album showing 20 years of music creation has been released by ACT in march 2010. AllAboutJazz will say: «the ample evidence of an artist whose voice has been his own from the very beginning». He’s guest soloist on Erkki Sven Tüür’s 5th symphony with Bremen Philarmonic. For the 2nd time Nguyên Lê is the recipient of the CMA/FACE grant which helps the «Saiyuki inviting Rudresh Mahanthappa» project to tour in US in the fall 2010. In 2011 he is awarded by the rank of «Chevalier de l’ordre des Arts & des Lettres» by French Cultural minister & receives the Django Reinhardt prize by French Academie du Jazz. «Ting Ning», excerpt from «Tales from Viet-Nam» (1996) is selected between only 4 european artists in the 6-CD compendium «Jazz: the Simthsonian Anthology».

The album «Songs of Freedom», released in april 2011, is an exotic & eccentric reading of Pop hits from the 70’s with Illya Amar, Linley Marthe, St. Galland & guests Youn Sun Nah, David Linx, Dhafer Youssef, a.o. It has received a fantastic welcoming from international press («Record of the Year» & cover story in Jazzmagazine/Jazzman) & was on top jazz charts of Itunes & Amazon. N. Lê is part of «Nights on Earth», Vince Mendoza’s last album. He takes part of the first International Jazz Day celebration at Unesco with Herbie Hancock. In 2013 he produces the album «Doc Dao» for & with Hanoian singer Tung Duong, with which he receives 3 awards in Vietnam : «Best Song of the Year», «Man of the year» & «Best Show of the Year». In 2014, he released «Celebrating the Dark Side of the Moon», a very personal version of the famous Pink Floyd’s album, with the NDR Bigband, Youn Sun Nah, Gary Husband, and Michael Gibbs’ orchestrations. He was nominated as best international guitarist for the ECHO JAZZ 2015 (German Music Award) beside Bill Frisell & Pat Metheny.

Hà Nôi Duo,  Nguyên Lê’s 16th album, was released in 2017. This duo was born in the meeting with traditional musician Ngo Hong Quang with the goal of expressing and sharing with the world the soul of Vietnam, and bringing together the roots and the future of Vietnamese music