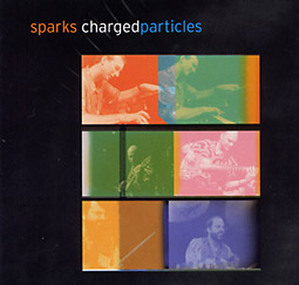 "... full of wonderful fusion surprises. The music is exciting, challenging, dramatic, classical, and colorful with lots of texture.  Each song tells a story."

"Charged Particles has fiery imagination and impeccable technique.
They bring astonishing freshness to the fusion sound."

"... a set of heady, intoxicating pieces that effectively meld electronics and
driving rhythms with the virtuoso playing and jazzy
interplay that mark fusion's best.

Charged Particles throws off sparks aplenty -
the album effectively showcases both the group's chops
and its sensitivity without resorting to gimmicks or cliches."

Evening Street:
Peladon:
In Peace:
The above audio excerpts cannot be heard on a mobile device - please
listen to them on a computer.

From these roots, some branches have turned into dead wood, but others have sprouted wings and fly beyond the boundaries of simple swing or a 4/4 beat.  Such a forward thinking ensemble has flourished in Columbus, Ohio, for the past ten years.  They are dubbed Charged Particles – artists who utilize the precepts of the original fusion movement, churn out original material, and reshape the compositions of their heroes.

Hutslar's "Three Groups Of Three" is a perfect title for this extended, involved composition.  The prelude uses a grouping of three repeated chords melding into four, and back.  An animated phrase of hyper-kinetic piano leads and follows a hopping samba, bristling with Rak's bubbling bass lines.  Sparks are flying.  The bulk of the tune from the keyboardist’s standpoint is an expansive, symphonic delight, as Hutslar explores the rainbow at his digital disposal.  "In Peace" is Rak's pen to a better world – a sensitive ballad with a melody that is fresh, breezy and intriguing.  The unmistakable fretless, harmonic influence of Jaco Pastorius is evident here, bearing witness full force in Rak's solo.